In the year of 2018, the real estate market in Nanaimo showed four trends:

These four trends are all different from2016 and 2017, and will be explored in more detail below. 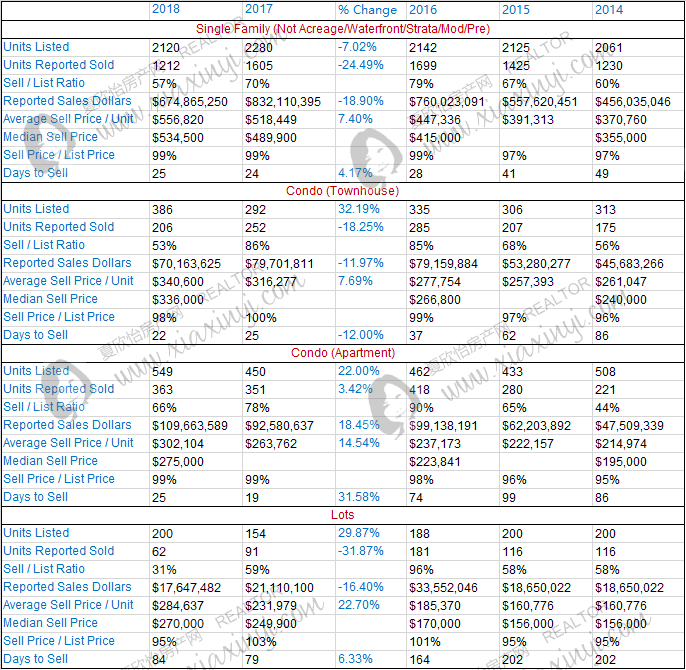 As can be seen from Table 1, average prices of the four major types of residential properties: vacant land, detached houses, townhouses and apartments, all increased in the year of 2018. However, except apartments, the sales volume of all the other three types have dropped. For detached single family homes, the sales decreased by 24.49% compared with 2017, reaching the level of 2014.

From Table 1 and 2, two obvious phenomena can be found:

As can be seen from Chart 1, in 2018, the main type of residential properties, detached house, has experienced obvious trend of rise and decline. From January to May, both the price and sales increased prominently; but from June to Sep, although the price increased a little bit, the sales decreased in some degree; while from Oct to Dec, both price and sales dropped dramatically. In addition to the seasonal factor, another reason of the decrease is the new policies. Overall, the whole trend is similar to the previous two years, however, the drop of the price and sales in the latter part of the year should be noticed.

As showed in Chart 2, in the year of 2017, the price of detached homes of Nanaimo has seasonal fluctuations. In 2017, the market went up after the early spring and prospered until June, then drop down a little bit in July and August, then heated up again in the fall, and went down at the end of the year.

The similar seasonal trend also could be found in most of the previous years. Taking 2016 as another example, as showed in Chart 3, we can see the seasonal trend more clearly.

The market performs better for the half of the year and goes weak for the second half can be considered as the overall seasonal trend of Nanaimo Real Estate market. However, this trend is much more significant in 2018.  Apart from seasonal reason, policy factors contributed to this trend  to a great extent.

Table 3: Vancouver Island, 2015-2018 inventories of all types of properties

From Table 3, we can see that at the end of 2018, supplies increased compared with the end of 2017. The situation of supply shortage has been relieved to some extent.

As far as the Nanaimo real estate market is concerned, as shown in Table 4, the number of properties in each type at the end of 2018 has increased by a certain margin compared with the end of 2017. However, except strata townhouses, the inventory of the other four real estate types are still far below the level of the end of 2015.

Nanaimo Real Estate Housing Price Trend in 2019
In the 2017 Nanaimo Real Estate Report, I made a prediction of the real estate market in 2018, which is “In 2018, BC and even Canada’s national real estate policy will still have an important impact on Nanaimo’s real estate market. From the past situation, Nanaimo tends to be a beneficiary of the regulation. Although in 2017, Nanaimo’s housing price has increased significantly compared with 2016, it is still significantly lower than Vancouver, a city on the other side of the strait. In the case of single family homes, the former is less than one-third of the latter’s price.”

There are two key words: “policy” and “price difference” were influencing Nanaimo’s real estate market in the year of 2018.

Looking forward to the Nanaimo real estate market in 2019, my predictions are as follow: First, from the policy point of view, Nanaimo is gradually losing its advantage compared with Vancouver. Second,  as for the price difference, compared with Vancouver, the advantages still exist, but the gap is gradually decreasing. Therefore, in 2019, Nanaimo’s real estate market is likely to return to the status of Vancouver’s shadow market. In addition, in 2019, policies will still have a major impact on Nanaimo’s real estate prices.

Hope to discuss the market or learn if it is the right timing to buy or sell?  Please don’t hesitate to contact me.