2016 is a very special year for BC real estate market. During this year, Nanaimo housing price went up dramatically, especially in the spring months. Single family house averaged at $451,465 in December, which is a 17% increase compared with January ($386,056). 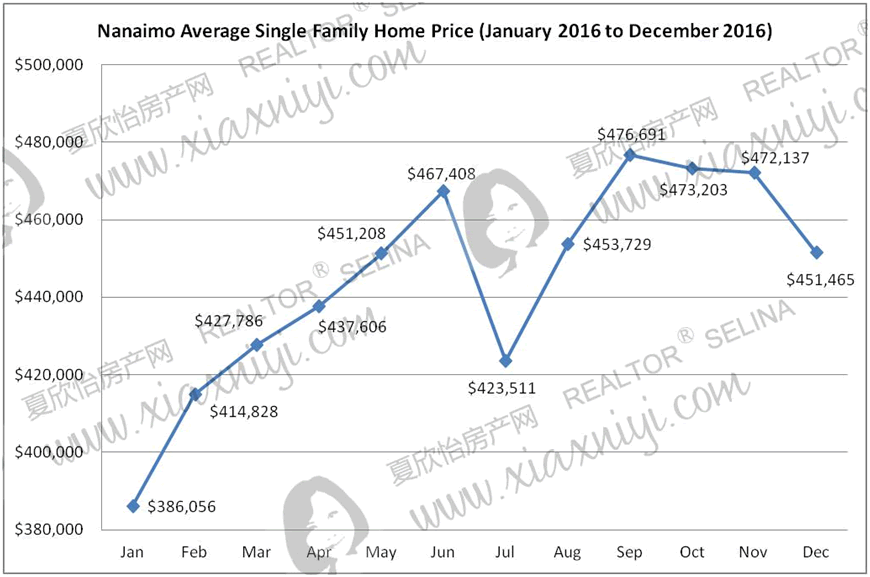 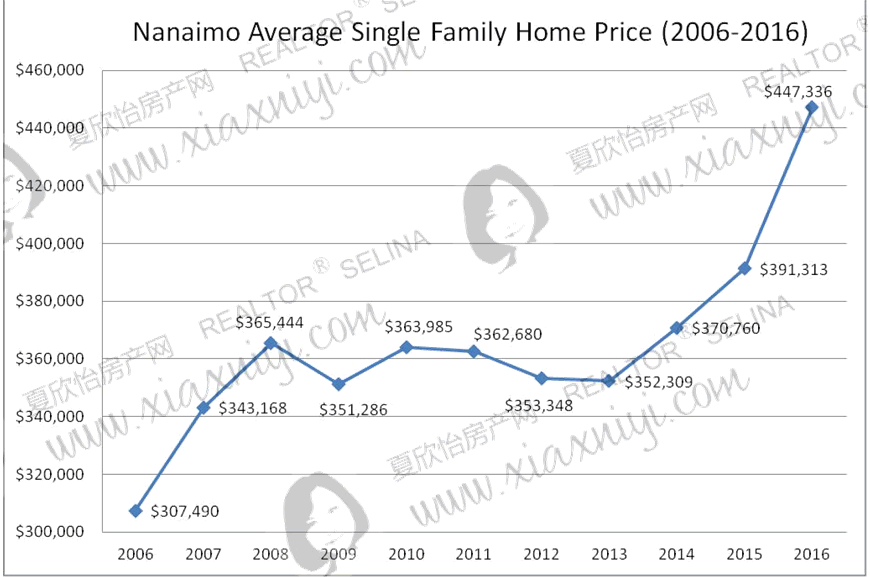 Although growth is a general trend, there is variation among different types of property and different subareas.

As shown in the table below, prices for bare lots and single family homes have grown by 15% and 14% respectively, followed by patio homes (12%). Price for townhouses and apartments grew relatively slow. This is a typical demonstration of the growth rate of different housing types– the larger proportion the land is in the value of a property, the more likely the price will go up. 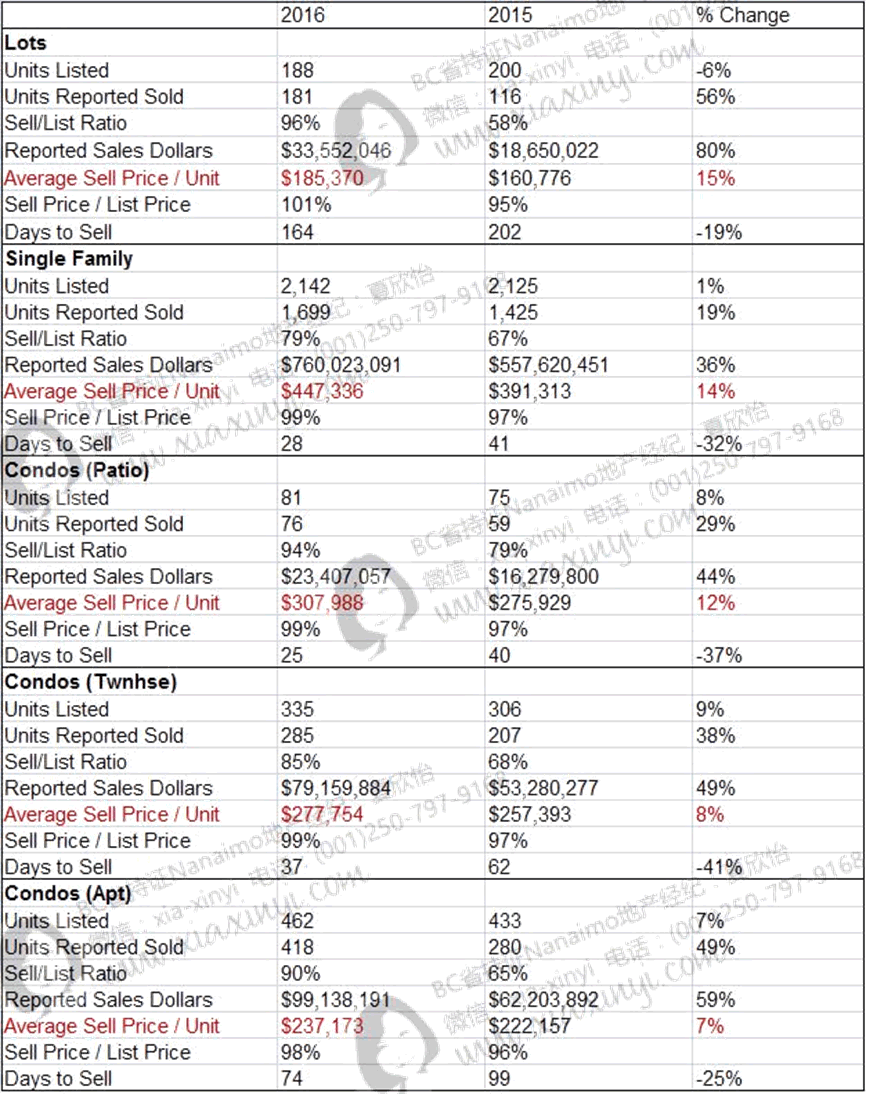 We can also notice that growth in housing price is not even in different parts of the city. The maps below shows the average single family house price in the subareas of Nanaimo in 2016 and 2015. 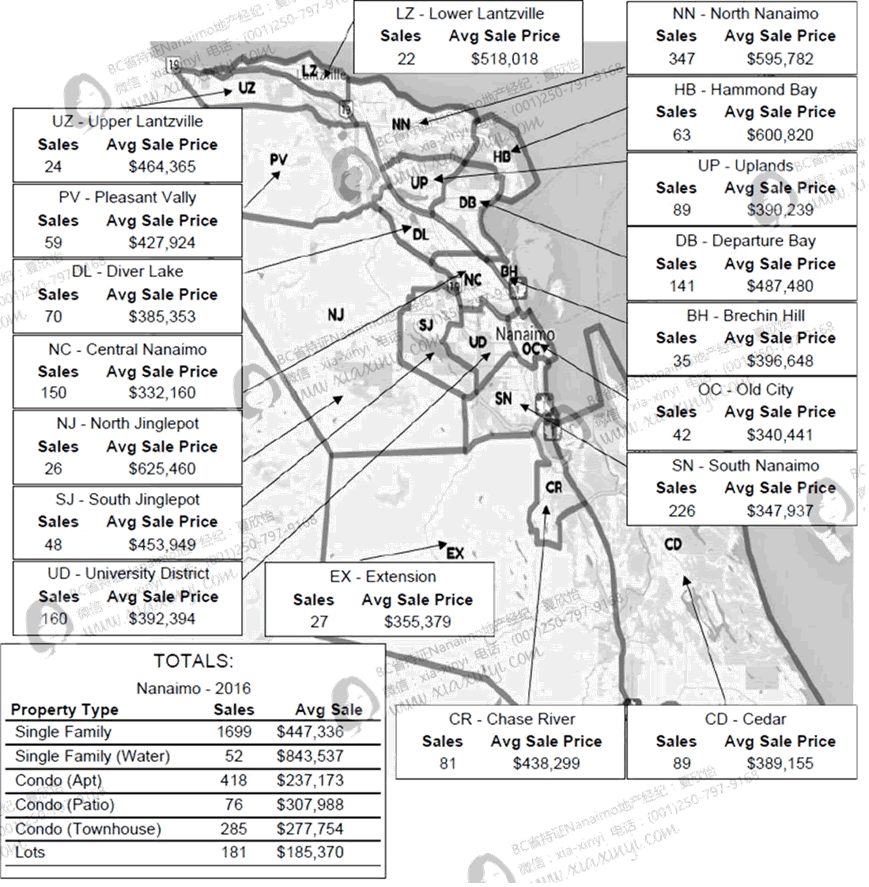 Comparing it with that of 2015, we find that North Jinglepot, Departure Bay, Chase River, Hammond Bay, South Nanaimo and North Nanaimo have a growth rate of around 20%. These are either higher quality communities or communities that are undergoing vast redevelopment.

As for the supply and demand, Vancouver Island housing market is tighter in 2016 than any other years in the recorded history, and is still getting tighter. At the end of 2015, there were 1375 single family houses publically listed on the market in Vancouver Island, but in December 2016, the number shrunk to 859. Similar trend can be seen on all types of properties, in Nanaimo and on the Island as a whole. If this market condition continues, the housing price will be pushed even higher in 2017.

What shall we expect for 2017? Many of you have asked me for my opinion on the

effect of 15% Vancouver foreign buyer tax on Nanaimo housing market. According to official statistics, after the tax came in to effect, single family house price averaged at $1,577,300 in Vancouver in August 2016, which is a 0.1% drop compared with July 2016. However, Nanaimo average price increased to $453,700 in August, which is a 7.14% increase. When looking at the market trend of Vancouver and Nanaimo, we can notice that the Vancouver housing price went down steadily after the new tax, but the Nanaimo market still went up, except slight decrease at the end of the year, which is a common seasonal phenomenon. 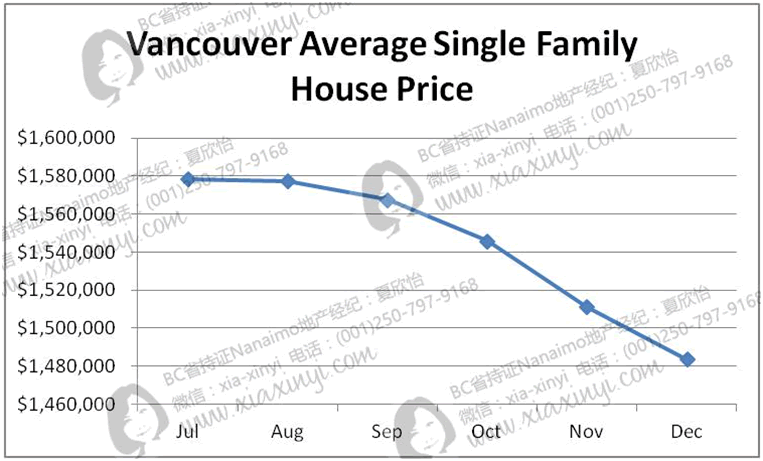 The 15% foreign buyer tax and the vacant home tax on Vancouver shows that BC government is taking action on the distorted housing price. At the same time, the

government is offering BC home partnership to help working class buy their first home. These seemingly contradictory policies show a clear attitude of the government: to balance the housing market in different regions in the province, and to facilitate housing affordability. Although Nanaimo Average single family price has increased to $447,336 in 2016, it is still less than one third of that of Vancouver. It is very likely that the Spillover effect together with the low inventory will continue to lift the Nanaimo housing price in 2017. How to make smart moves in today’s market as a buyer or a seller? Please contact Selina Xia for a private consultation.